Design and Project Management by verynice

This was a WordPress build where Rosebud Designs collaborated with local agency verynice. This was a complex build, requiring us to move from an old Drupal build and also requiring us to move several years’ worth of blog posts and keep everything intact, including authors, categories, photos, and copy. A designer from verynice provided the design for the custom theme, and Rosebud Designs handled all coding and consultation, and customized the admin panels in WordPress to make updating content easy for Heal the Bay. Rosebud Designs also handled building different functions needed for the site, including the display of job postings, intake forms, and connecting to their third-party donation service.

The result is one of the more complex WordPress builds Rosebud Designs has handled, but the site is still going strong after a few years!

Design and Project Management by verynice

Rosebud Designs partnered with a frequent (and favorite) collaborator, verynice, on this project. Invisible People educates the public about homelessness and encourages the public to learn about the issue and realize how complex it is, and also arms people with the tools to advocate for the homeless community.

The website build itself was one of the most complex designs created and coded for a custom theme, and as far as functionality was concerned, there were two different post types to contend with, as well as a complex tagging system that spanned both post types. Another complicating factor in this build was that Invisible People had almost 10 years’ worth of content that needed to be migrated into a new WordPress build, and almost all of that content needed to be separated into two different post types — the stories and news articles were originally mashed into posts. The result of this work is a more compelling website that is easy to navigate and better showcases not only the video stories but also offers more breadth and depth to what Invisible People does right away.

826 National is an organization dedicated to fostering a love of reading and creative writing and self-expression to underprivileged children across the country. The organization has chapters in several cities, as well as an online platform for educators to access if they don’t have an 826 chapter in their area.

The Price Center for Social Innovation is a research center based out of the Sol Price School of Public Policy at the University of Southern California. The Center wanted a redesign of their old site, which was a WordPress site but had limited capabilities. They wanted to be able to handle various content types and have a place to put in their considerable amount of research, and let people sort through the research database by several different categories and authors. Rosebud Designs handled the redesign, site architecture, code, and migration of content to a new WordPress site.

Rancho La Puerta is a spa and resort located in Tecate, Mexico, and is considered a pioneer in the spa movement. This was an extensive project that involved not just a redesign and a rebuild of their site, but also a re-imagining of their user experience and site flow. The previous site was written entirely in HTML and sprawled over 500 pages. It was difficult to maintain and also had overwhelming navigation and poor flow; even staff members who took reservations and questions over the phone from guests would get lost navigating their own site.

With the new site, the Ranch staff expressed a desire to be able to manage all their own content and be able to integrate an extensive event calendar, a blog, and social media components. The result is the new Rancho La Puerta site, which integrates inviting photography, a simpler navigation bar, and carefully placed calls to action on each page. The original 500 pages were also pared down to almost half, consolidating information where needed. Several complex forms were also integrated into the site so guests could inquire about reservations, book classes and spa treatments, and fill out pre-arrival information.

Design and art direction by George Wilson and Lizz Rantze

Rantze + Raves is a Los Angeles-based production company, and Lizz wanted a snazzy new site that better showcased her video and visual work and also would have a more robust blog. The result is a dynamic, fun site that reflects Lizz’s awesome personality and wide-ranging video work.

Erasing the Distance is a non-profit theatre company based in Chicago that aims to end stigma surrounding mental health and tell powerful stories of people coping with mental health issues. The company wanted a redesign of their original site and also wanted it moved from ExpressionEngine to WordPress, and Rosebud Designs helped with this transition, doing the redesign, coding, and re-platforming of the site.

Caroline’s Coffee is an artisan coffee roaster and shop located in Grass Valley, CA. The owners wanted to integrate a new design and a new content management system for their site so they wouldn’t be dependent on contacting another developer to make changes to the site.

Grady Fike provided a new design, and Rosebud Designs built it in WordPress. The new site incorporates a WooCommerce shopping cart system, so the owners can easily add and manage their extensive array of products, and so customers can easily order from them. The site also brings together an already existing blog and puts everything under one roof for easy management so the folks at Caroline’s can focus on their great coffee instead of wrangling over site maintenance. 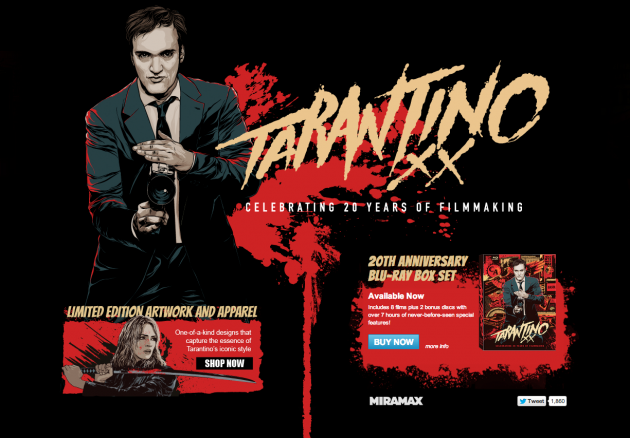 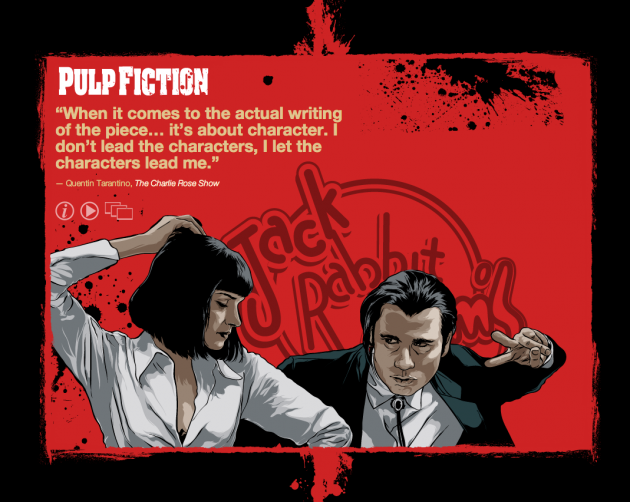 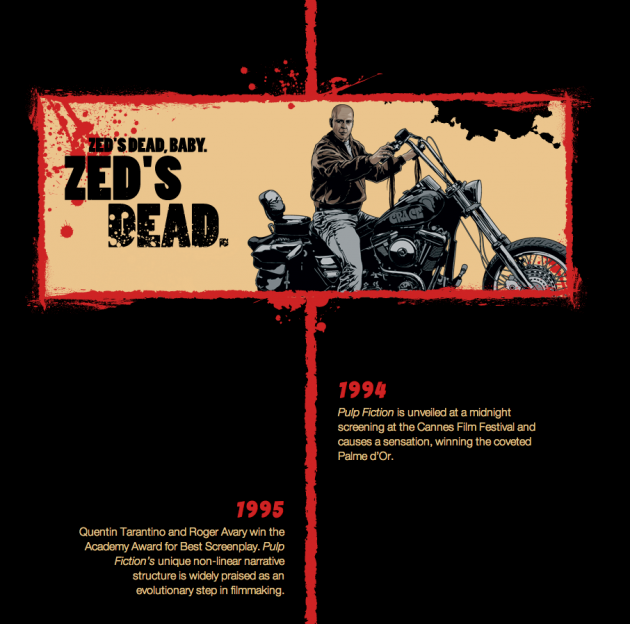 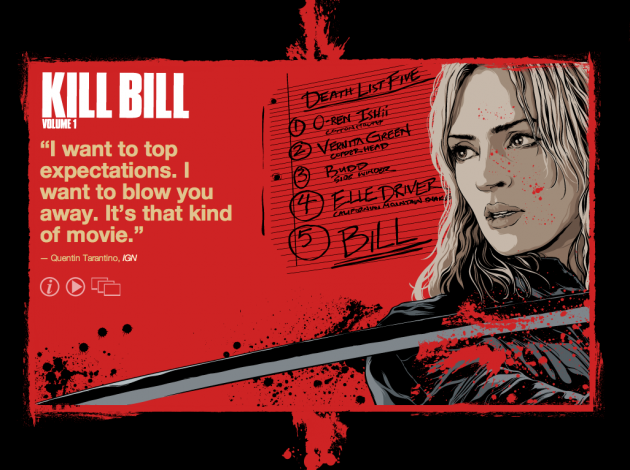 This site used the bold, comic-book-style artwork used for the boxed set and sought to tell the story of Quentin Tarantino through timeline tidbits and panels featuring all eight films in the boxed set. To add visual interest, many of the panels were animated. Miramax’s website was already built in WordPress, and because this mini-site was part of the main website, it also had to be integrated into their existing WordPress build.

Miramax was able to edit all content on the Tarantino site, from the timeline items to the promotional panels at the top of the site. Each animated panel featuring a film was also editable, featuring a quote about the film, and some multimedia items — slideshows of stills from the films, or trailers, or both. 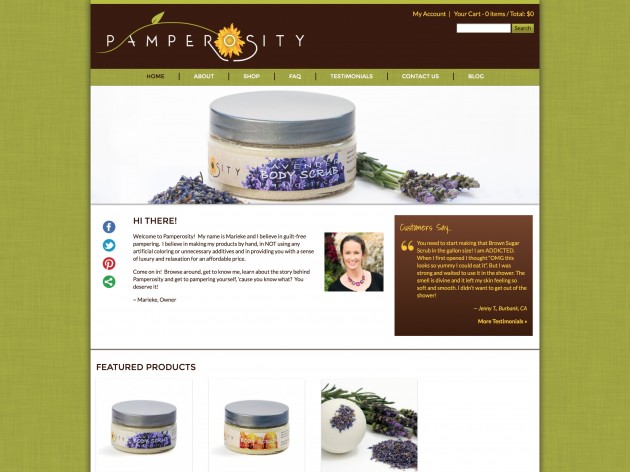 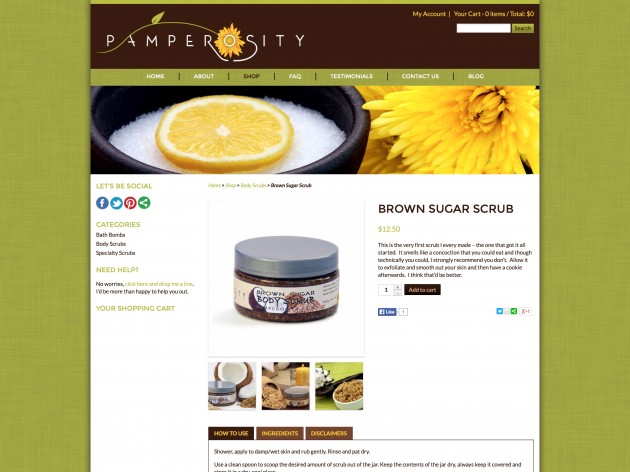 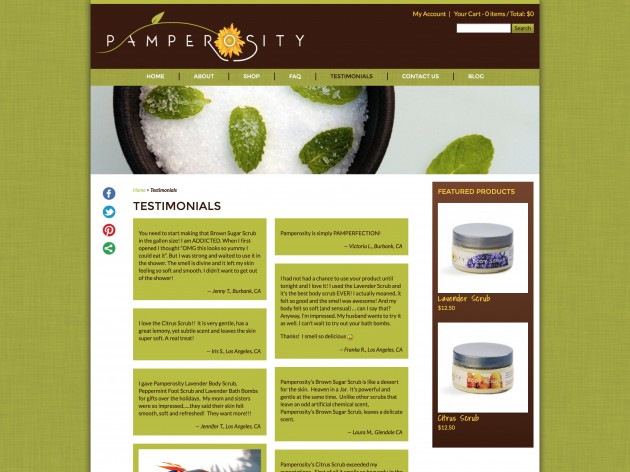 Pamperosity is a shop run by Marieke Beeler, and sells homemade bath and body scrubs. Marieke approached Rosebud Designs because she wanted an online storefront and her own website and wasn’t sure where to start. I handled this project all the way from concept to execution, from wireframing to design to development to deployment. Pamperosity is built in WordPress, and its e-commerce is handled through WooCommerce. I also helped Marieke set up all the components she needed to get her online store running, such as her payment processor and shipping services, and provided training and documentation at the end so she could update and maintain her shop. 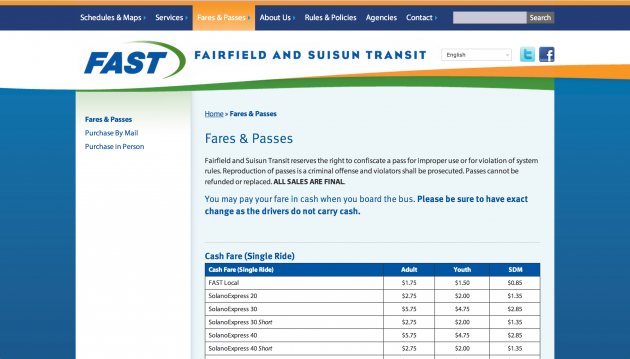 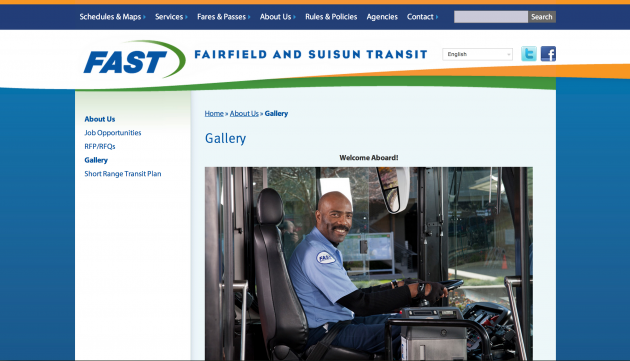 Work done as part of a team at Page Design Group, Sacramento

The Fairfield and Suisun Transit agency had its old site overhauled by Page Design Group, and needed a site that they could manage themselves. As a transit agency, they wanted to be able to update all their route timetables easily, as well as provide maps for each route. The front page also has a form that integrates with Google Maps to provide real-time route information.

Rosebud Designs did all the WordPress programming and HTML/CSS coding from the designs provided by Page Design Group. In addition to that, I also provided training to the FAST staff and documentation of their site so they could update everything on the site and continue to maintain it. 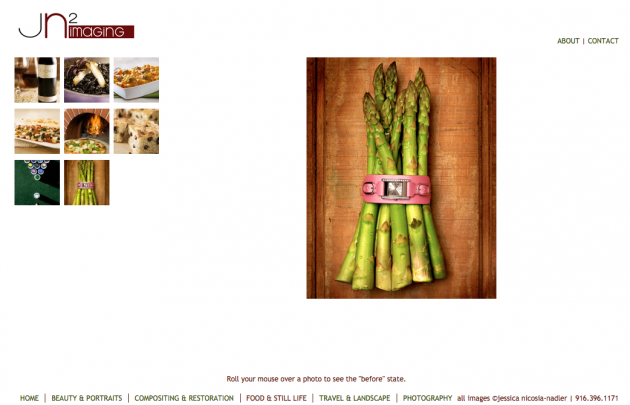 Jessica’s original portfolio site was built in Flash, and she wanted a brand new design that not only got her out of using a Flash site, but also was a site she could manage herself. WordPress was chosen as a platform so Jessica could update her photo galleries easily.

There are two sides to Jessica’s site: her photography and her digital imaging portfolio, which includes retouching and other digital photo manipulation. She wanted a distinct look for both showcases.

The site features several galleries, a front page Apple-style “cover flow” showcase on the photography side, and before-and-after rollovers for the digital imaging portfolio. 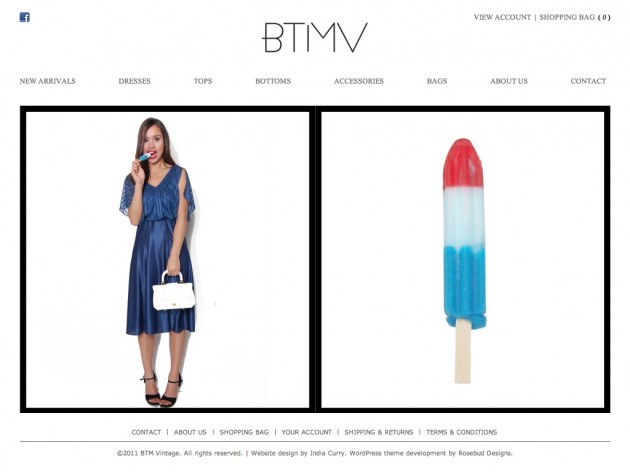 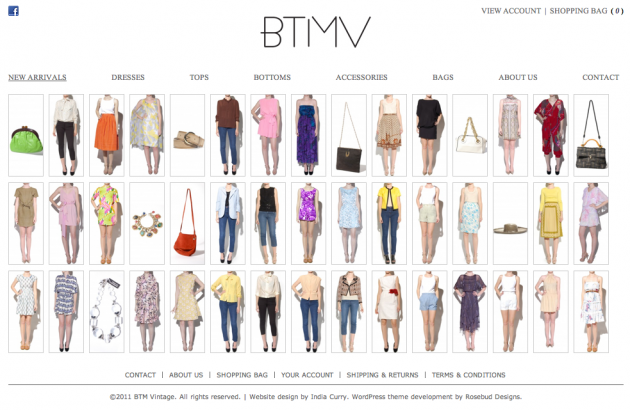 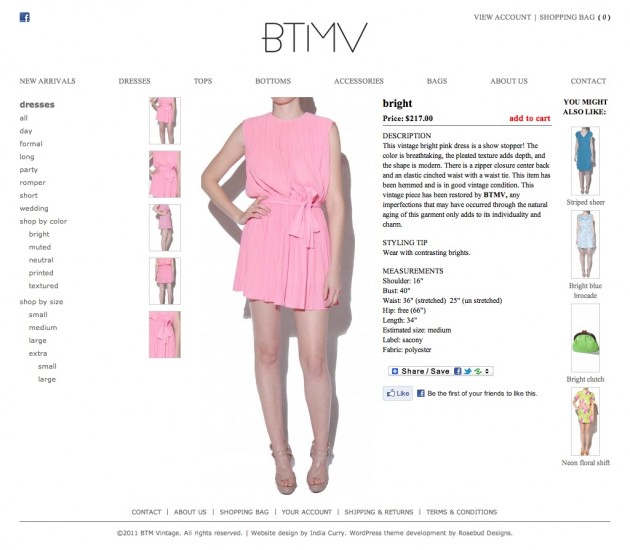 BTM Vintage is an online vintage clothing shop. Mimi needed to start from scratch with her shop, and a WordPress + WordPress e-commerce solution was built for her. Everything in the shop is one-of-a-kind, and updates are on a fairly frequent basis, so Mimi needed a nimble and simple system. She was also only taking PayPal payments, so  WordPress fit that bill.

The 3.8.x version of the e-commerce plugin was used, along with a few other plugins on the individual product pages to allow customers to zoom in and see product detail more clearly and allow for a “You Might Also Like” section that links certain products together. 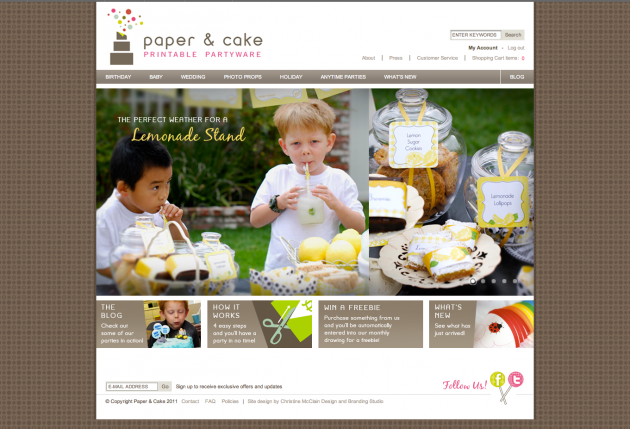 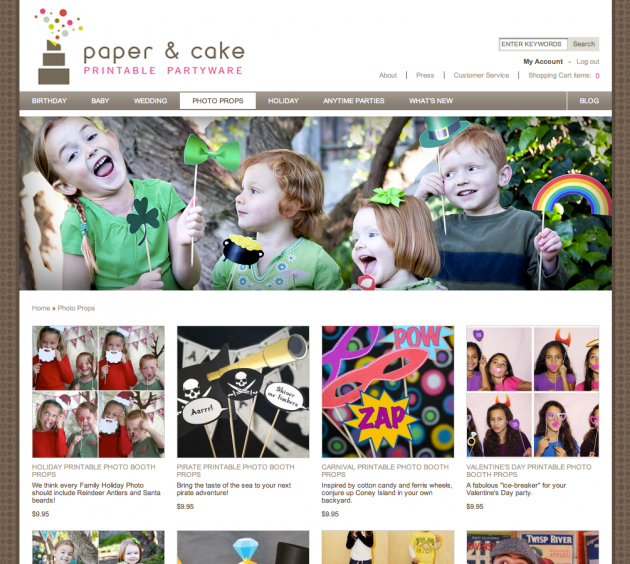 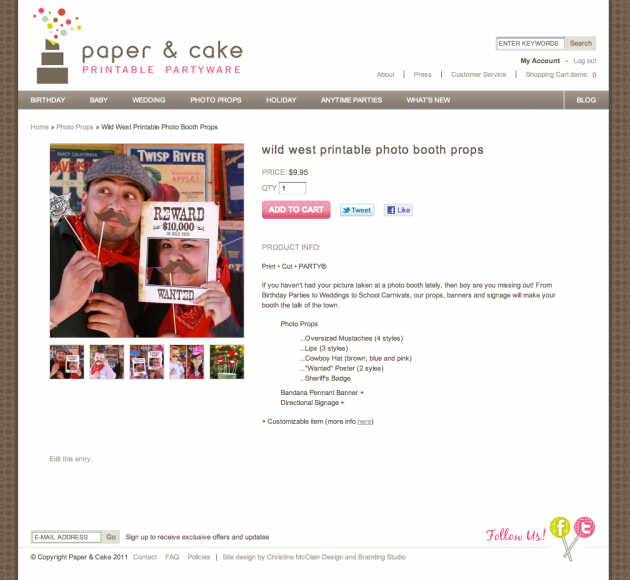 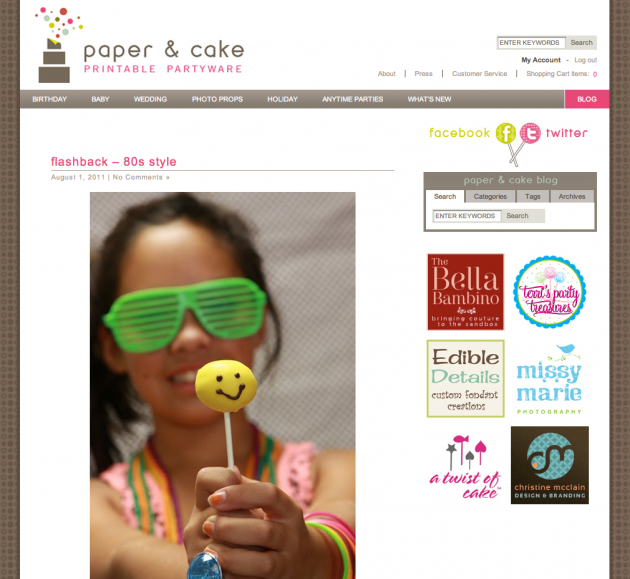 Paper & Cake is a shop specializing in printable partyware for all occasions. The former setup was a ProStores shop and a separate blog on Blogger. Abby wanted to revamp and start on a new platform with a new design. We used WordPress so Abby could easily update her store, her information and her blog in one place.

The WordPress e-commerce plugin was used to handle all the shop demands. The shop has no physical products, so fulfillment is strictly via PDFs that are emailed to the customer as soon as PayPal payment is made. All the old blog entries were also imported into WordPress. Chris tied everything together with a fresh, clean design.